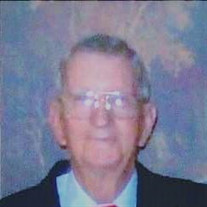 Robert Lynn Pullen, SR, 86, of 320 Metts Lane, Damascus, GA 39841, passed away at his home, Friday, May 25, 2018. His funeral will be Sunday, May 27, 2018 at 3 p.m. at the Chapel of Manry Jordan Hodges Funeral Home with Rev. Buren Womble and Rev. Robert Pullen officiating. Visitation will be one hour prior to the funeral beginning at 2 p.m. Burial will be in the Pine Lawn Gardens Cemetery. His pallbearers will be Joseph, Nathan and Jared Pullen, Jamie and Jason West and Will Avera. Mr. Pullen was a member of Damascus Baptist Church and he was a row crop farmer. He also was a crop insurance agent. Mr. Pullen was born on February 4, 1932 to the late Thomas Metts Pullen and Mamie Lee Rooks Pullen. Other than his parents he was preceded in death by his step-mother, Annie Laura Hughes Pullen, 3 brothers; Marion Pullen, Metts Pullen and Harold Pullen. His survivors include his wife, Betty Joyce Roberts Pullen, 4 sons; Robert Pullen, JR and Harriett of Troy, AL, Lamar Pullen and Legwynn of Damascus, GA, Mike Pullen of Damascus, GA and Mark Pullen and Pamela of Troy AL, 7 grandchildren; Nathan Pullen, Joseph Pullen of Troy, AL, Jared Pullen and Jennifer of Banks, AL, Dana Wyatt and Justin of Geneva, AL, Michelle Avera and Will of Leesburg, GA, Matthew Pullen of Stillwater,Oklahoma and Joey Pullen of Albany, GA. There are also, 6 great-grandchildren; Daniel Lamar Pullen of Banks, AL, Hunter Wyatt, Maci Wyatt of Geneva, AL, Liam Avera and Owen Avera of Leesburg, GA and Emma Pullen of Stillwater,Oklahoma.

The family of Robert Lynn Pullen SR created this Life Tributes page to make it easy to share your memories.

Send flowers to the Pullen family.