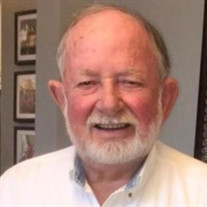 John Wesley Barron, 79, passed away on Tuesday Oct. 26 surrounded by his family at Southeast Health in Dothan, AL. His funeral service will be held on Friday, October 29, 2021 at 10 a.m. in the Chapel of Manry Jordan Hodges Funeral Home with Rev. Sterling Jones officiating followed by burial at Pickle Cemetery in Early County with Jonathan Pugh, Jack Barron, Joshua Moore, Ryan Moore, Ande Stone and Johnny Gallops serving as pallbearers. John was born in Blakely, GA on February 27, 1942 to the late John Jay Barron and Addie Lou McAlvin Barron. He was a member of Southside Baptist Church. John loved his wife of 58 years, Barbara Jean Davis Barron, whom he taught to drive in their early years. John operated the Peter's Drive-in Theater before he began a long career in hardware. He was a very hardworking man opening his own business, (Barron Hardware) in Blakely, GA and from there working for Lowe's in Albany, GA until he retired. Generous and dedicated, his family remembers him always ready to help those in need even if it meant leaving home on holidays to open the hardware store for people during emergencies. He loved his cat, Chip, whom he adopted when his grandson, Dalton, passed away. His family remembers him as a kind hearted PaPa. He loved to play pool and fish and loved vanilla ice cream. Other than his parents he was preceded in death by two brothers, Robert and Jack Barron, and grandson, Dalton Gallops. His survivors include his wife, Barbara Jean Davis Barron; three daughters - Wanda (Ray) Gallops, Laura (Jack) Stone, and Jill Moore; four grandsons - Johnny Gallops, Ande Stone, Joshua Wesley Moore, Ryan Moore and one granddaughter - Lexie Stone; and one great granddaughter, Kadence (KK) Gallops. He is also survived by brother Tommy (Vicki) Barron and sister Carolyn (Ben) Ramsey and many nieces, nephews and friends.

John Wesley Barron, 79, passed away on Tuesday Oct. 26 surrounded by his family at Southeast Health in Dothan, AL. His funeral service will be held on Friday, October 29, 2021 at 10 a.m. in the Chapel of Manry Jordan Hodges Funeral Home with... View Obituary & Service Information

The family of John Wesley Barron created this Life Tributes page to make it easy to share your memories.

Send flowers to the Barron family.