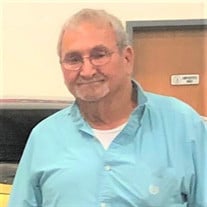 Preston Chandler, Jr., 74, passed away Sunday, November 14, 2021, at Southeast Health in Dothan, Al. Funeral services will be held on Wednesday, November 17, 2021 at 2 p.m. at Cedar Springs Free Will Baptist Church with Rev. William Smith officiating. Burial will follow in the church cemetery with Seth Atkinson, Brandon Aycock, Ken Chandler, Stormy Rogers, Kent Earl Rogers, and Jason Rogers serving as pallbearers. Visitation will be held one hour prior to the funeral service from 1 until 2 p.m. Preston was born in Midland City, AL on March 19, 1947 to the late Preston Chandler, Sr. and Ocie Beasley Chandler. He was a the greatest man ever known by his family and was the foundation for all of them. A hard worker who broke his back to love and support anyone in need and was always there for anyone. Other than his parents he was preceded in death by a granddaughter, Hillary Chandler, one sister, Betty Jean Blanlenship, one brother, Jeffrey Chandler and a step-daughter Christie Deese. His survivors include his wife, Marlene Chandler, three sons; Keith (Rhonda) Chandler, Jeff (April Barfield) Chandler and Ken Chandler, one daughter, Sherry (Patrick) Coolahan, one step-son, Scott (Kimberly) Deese and one step-daughter, Terry Deese, 9 Grandchildren and 14 Great-Grandchildren.

The family of Preston Chandler Jr created this Life Tributes page to make it easy to share your memories.

Send flowers to the Chandler family.