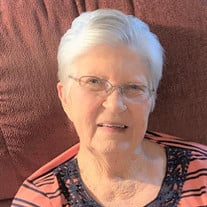 Celestine “Sister” Jackson Adams passed away January 22, 2020 at Phoebe Putney Memorial Hospital. She was born March 10, 1939 and would have been celebrating her 81st birthday this year. Celestine graduated from Baker County High School and married the love of her life, Hollis Adams, with whom she shared 60 beautiful years, described as “never a sweeter love”. She was a member of Arlington Baptist Church where she was a beloved member of the Gleaners Sunday School class. In her early years of church service, she taught the children’s Beginner Sunday School class and rocked many babies in the nursery. The children lovingly called her “Tine”. She served her church in many roles through the years, setting a legacy of faith for her children and grandchildren. Celestine was also known for her delicious cooking, gardening, and spotless home filled with love and hospitality. Celestine was preceded in death by her parents, James Earl Jackson, Sr. and Cora Nix Jackson; one son, Marty Ray Adams; one nephew, Ralph Hudgins and six siblings. Celestine is survived by her husband, Hollis M. Adams; daughter, Tammy Adams Lowe; and son, Randy (Alice) Adams. She was lovingly called “Nana” by her grandchildren, Corrie (Michael) Malphrus, Adam Lowe and fiancé, Megan Steed; Parker Adams, and Paxton Adams, and by her great-grandchildren, Michael Hollis and Connor Adam Malphrus. She is also survived by her brother Bobby Jackson (Mary), and many nieces and nephews. A celebration of her life will be held Saturday morning, January 25, 2020, at 11:00 a.m. in the Arlington Baptist Church with Dr. Gary Hadden and Rev. Ric Veal officiating. The family will receive friends for visitation one hour prior to the service beginning at 10 a.m. in the Social Hall of the church. Burial will follow in the Leary Cemetery. Serving as pallbearers are Hank Jester, Will Jester, Mike Newberry, Tony Smith, Mike Stuart, Richard Ward, Mike Williams, Mickey White and Larry Worsley. Honorary pallbearers are Butch Kaminsky and the Ike Newberry Sunday School class. The family would like to express sincere gratitude and appreciation to the CCU medical team at Phoebe, lead by Dr. Enrique Lopez, who compassionately helped them through this difficult time. If desired, memorial gifts in her memory may be made to Arlington Baptist Church.

Celestine &#8220;Sister&#8221; Jackson Adams passed away January 22, 2020 at Phoebe Putney Memorial Hospital. She was born March 10, 1939 and would have been celebrating her 81st birthday this year. Celestine graduated from Baker County High... View Obituary & Service Information

The family of Celestine Jackson Adams created this Life Tributes page to make it easy to share your memories.

Send flowers to the Adams family.