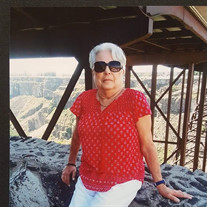 Barbara Kay Walker, 70, of 500 Peter St., Colquitt, GA, passed away in Salt Lake City, Utah on August 16, 2019 while visiting a grandson. A Memorial Service will be held in the Chapel of Manry-Jordan-Hodges Funeral Home, Blakely, GA, Saturday, August 24, 2019 at 1 p.m. with Rev. Jack Cowart officiating. Burial will be in the Salem Cemetery. Visitation will be held Friday, August 23, 2019, 6 to 8 p.m. at Manry Jordan Hodges Funeral Home. Barbara was born on June 27, 1949 in Ashland, AL to the late Dennis Nolan Walker and Mildred Irwin Walker. She was a police officer for the City of Arlington and was a correction officer in Lowndes County, GA. She was of the Baptist Faith. Other than her parents, she was preceded in death by a daughter, Tammy Kay Kimbrel and a son, Andy Dunn. Her survivors include a son, David Busby and Popsicle of Colquitt, GA and a sister, Bonnie Harwood and Daryl of Helena, Montana. She has 7 grandchildren: Brittany, Bryan, Brooke, Jared, Jasmine, Kolt and Megan and 6 great grandchildren: Haley, Logan, Evan, Kash, Leland, and Jackson. Barbara would also want us to include her best friend, Darla Dunn and husband Jamie, and some special other friends: Booger, Belinda, Kindryn, Kennah, Jr., and Khaos Wells.

The family of Barbara Kay Walker created this Life Tributes page to make it easy to share your memories.

Send flowers to the Walker family.