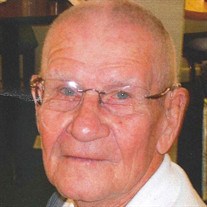 Thomas Theodore "Tom" Tucker, Sr., 88, of 201 Cherry Ave., Blakely, Ga. 39823, passed away early Saturday morning, Nov. 12, 2016, at the Pioneer Community Hospital of Early in Blakely, Ga. The funeral will be held on Tuesday, Nov. 15, 2016 in the Chapel of Manry-Jordan-Hodges Funeral Home at 11 AM with visitation starting at 10 AM. Rev. James Hilburn and Rev. Hubert Smith will be officiating. Burial will follow in the Blakely Cemetery. American Legion members; Kenneth Hall, Joe Freeman, Wally Robertson, Charles Garrett, Perry Jarrett and Joe Bush will serve as pallbearers. Mr. Tom was born June 11, 1928 in Baltimore, MD, the son of the late William McKinley Tucker, Sr. and Helen Edna Eder Tucker. He was a retired police officer for the Baltimore Md. county police department and also was a former Security Guard for Early Memorial Hospital in Blakely, Ga. He was a member of the Sowhatchee Baptist Church where he had served as a deacon. He was a member of the Blakely American Legion Post and a U. S. Navy Veteran of WWII and the Korean conflict. Other than his parents, he was preceded in death by his wife, Clara Louise Williams Tucker; a son, Thomas Theodore Tucker, Jr.; 3 brothers, William Tucker, Jr., George Tucker and Sherman Tucker and by a sister, Hope Gauschow. Tom is survived by a son: Michael James Tucker of Hagerstown, MD, a sister, Faith Hoffman of Stevensville, MD and 2 brothers: Gordon Tucker of Nokomis, FL, David Tucker of Williamstown, NJ and 2 grandchildren. He had 2 special friends and caregivers in Tracy and Sandy Busby of Blakely.

The family of Mr. Thomas Theodore " Tom"Tucker Sr. created this Life Tributes page to make it easy to share your memories.

Send flowers to the Tucker family.