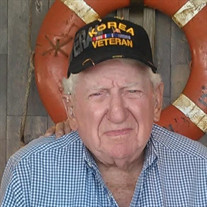 Thomas Charlton "T C" Hunt, Jr., 89, of Damascus, GA, passed away Wednesday, December 25, 2019, at his residence. His funeral will be held Saturday, December 28, 2019, at 3 p.m. at the Chapel of Manry Jordan Hodges Funeral Home with Rev. Sterling Jones officiating. The family will receive friends for visitation one hour prior to the funeral beginning at 2 p.m. Burial will be at the Blakely Cemetery with his grandsons Clay Hunt, Justin Hunt, Kyle Keen, Cole Hunt, Nathan Hunt, Matthew Hunt, Davis Williamson and Daniel Williamson serving as pallbearers. T. C. was born on August 3, 1930 in Damascus, GA to the late Thomas Charlton Hunt, Sr. and Jewel Rogers Hunt Martin. He was a self-employed farmer, a Sgt. in the U. S. Army during the Korean Conflict, a member of White Pond Freewill Baptist church and a member of the VFW and the American Legion. Other than his parents, he was preceded in death by a sister, Betty Hunt Ervin. His survivors include his wife, Roberta Killebrew Hunt of Damascus, Ga; 2 daughters: Sheryn Hunt Keen and Kip of Leesburg, GA and Tracey Hunt Williamson and Fiance' Richard Kirkland of Sylvester, Ga. There are 3 sons: Gary Hunt and Sharon and Terry Hunt and Ginger, both of Blakely, GA and Jerry Hunt and Sue of Panama City Beach, Fl. He has 15 grandchildren and 9 great-grandchildren. He is also survived by several cousins that reside in Panama City, FL and Leary, GA.

The family of Thomas Charlton "T C" Hunt Jr. created this Life Tributes page to make it easy to share your memories.

Send flowers to the Hunt family.