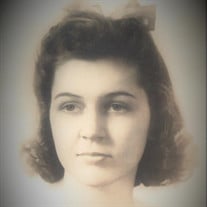 Sara Elizabeth Hawkins Harris March 10, 1924 - August 19, 2019 Sara Elizabeth Hawkins Harris, age 95, of 5424 Woodruff Farm Road, died Monday morning, August 19, 2019, at Magnolia Manor in Columbus. A memorial service will be held at 1:00 p.m., on Friday, August 23rd, at St. Luke United Methodist Church, Columbus, with the Reverend Dr. Cynthia Cox Garrard officiating. Burial will take place on Thursday, August 22nd, at the Grier Family Cemetery, situated near the Chattahoochee River, north of Hilton, in Early County, Ga., according to Manry-Jordan-Hodges Funeral Home of Blakely. Following the memorial service, the family will receive visitors in the parlor adjacent to St. Luke's main sanctuary. Mrs. Harris, named for her grandmothers, was born Sara Elizabeth Hawkins on March 10, 1924, in Muscogee County (now Columbus), the only daughter of the late Maude Faulkner and John Clifford Hawkins. Her paternal forebears were pioneer settlers who lived in area Georgia counties, Talbot and Meriwether, as early as the 1830s, and included members of Hawkins, Avent (Avant), Lumpkin, Slaton, Brown, and Owen families. Members of her Faulkner (Falkner) family arrived in Randolph County, Ala., in the first decades of the 19th century and later moved to Shelby County, where they lived in the Sterrett community. A child of the Great Depression, which is a label that she frequently used to describe herself and her distaste for extravagance, she attended public schools located within walking distance of her parents' home: Waverly Terrace Elementary, Columbus Junior High, and Jordan Vocational High School (Class of 1942). At the time of her marriage in 1948 to Jed Gilbert Harris, a U.S. Army officer who served in Italy and North Africa during World War II, she was working as the assistant to Dr. Miguel W. Jackson, Sr., a Columbus dentist. In 1954, at the birth of her first child, Mrs. Harris became--and remained over all of the following years--an exemplary full-time mother, as well as a devoted caregiver who was tirelessly available for sick and elderly relatives and friends. Mrs. Harris's husband, an Early County native, died at the age of 66 in 1985. His great-great-grandmother, Rebecca Westmoreland Grier, was the first person buried in the family cemetery where the graves of Mr. and Mrs. Harris will be marked. Moses Grier (1795-1856), who established the graveyard in the 1840s at his wife's death, was a member of the extended Georgia family that produced such citizens as the Reverend Dr. Isaac Grier, the first ordained Presbyterian minister born in the state of Georgia; Robert Grier, founder in the early 19th century of Grier's Almanac; and Margaret Grier Stephens, whose third and last child, Alexander Stephens, was a U.S. Congressman from Georgia in the mid-19th century and Governor of Georgia in the 1880s. Mr. Harris's maternal great-grandmother, Sarah Elizabeth Grier (wife of Robert Fulton Freeman), and his paternal great-grandfather, Samuel Alexander Grier (husband of Mary Ann Gilbert), were two of the five children born to Rebecca and Moses Grier. John Clifford Hawkins, Jr., Mrs. Harris's only sibling, died in 1994. His wife and the mother of their two sons, the former Sarah Rebecca ("Becky") Smith, died in 1993. For 50 years, Mrs. Harris was a member of Columbus's St. Paul United Methodist Church, the faith community in which she and her husband raised their two sons. Before becoming a member of St. Luke United Methodist Church, the last congregation with which she was affiliated, she had been a member of Epworth United Methodist Church for several years. As a child and a young woman, she attended Rose Hill Baptist Church, where she was baptized. In addition to her extraordinary commitment to family and friends over the course of her entire adult life, she had been a volunteer for such causes as Columbus Hospice, the Crippled Children's Clinic, the St. Francis Hospital Auxiliary, the Meals on Wheels program, and the Wynnton Neighborhood Network (interfaith food pantry and utility assistance ministry based at St. Thomas Episcopal Church, Columbus). Above all, Mrs. Harris will be remembered as a woman of great determination, strong principles, deep faith, and unselfish support for those around her in need. Survivors include her sons, Jed Gilbert Harris, Jr., of Columbus, and Roger Timothy Harris, of New York, N.Y.; two grandchildren, Jed Gilbert Harris, III (and wife, Ashley), of Atlanta, and Mary Elizabeth Harris Luciani (and husband, Luis), of Matthews, N.C.; four great-grandchildren, Burgin Luis Luciani, Robert Harrison Luciani, Anna Julietta Luciani, and Sara Elizabeth Luciani, all of Matthews; and a nephew, John Clifford Hawkins, III, M.D. (and wife, Anne Reid), of Jacksonville, Fla. Her brother's other son, Steven Michael Hawkins, died earlier this year. In lieu of flowers, memorial gifts to worthy causes would be appreciated. Because of her lifelong interest in the welfare of animals, donations to such organizations as Paws Humane (4900 Milgen Road, Columbus 31907) or the American Society for the Prevention of Cruelty to Animals (ASPCA, 424 East 92nd Street, NYC 10128) would be particularly appropriate.

The family of Sara Elizabeth Hawkins Harris created this Life Tributes page to make it easy to share your memories.

Send flowers to the Harris family.