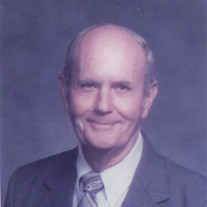 Robert Luther (R.L.) Thompson, a father, grandfather, great-grandfather, and retired U. S Air Force Chief Master Sergeant died in Plano, Texas on Wednesday, February 13, 2019. He was born in Bluffton, Georgia and later moved to Blakely, Georgia where he met and married Neta Kenney on October 6, 1940. Their marriage spanned a 73-year period that was filled with travel and adventure. R.L. enlisted in the Army Air Corps at the age of 17 in 1937 and served during three wars - World War II, the Korean War, and the Vietnam War as an aircraft crew chief and maintenance supervisor. He was stationed in many places including the Panama Canal Zone; Occupied Japan; Guam; and Zaragoza, Spain. Their favorite duty station, however, was always Turner Field in Albany, GA where they could return to Georgia and home. He retired after 31 years, 1 month and 21 days of service as a Chief Master Sergeant. His military awards and decorations include the Meritorious Service Medal. At 99, he would still say he missed flying. After leaving military service, they returned to Albany where he worked for Georgia Mack Sales until retiring in 1981. He and Neta purchased a motor home and enjoyed traveling and camping with a group of friends, "The Winnies." In 2009, they moved to Plano, Texas to be closer to their son and their beloved grandchildren and great-grandchildren. A true family man, he was happiest spending time sharing stories, playing cards, or just enjoying dinner with the one he loved. He was known as a man of great integrity, generous to everyone he knew, and always willing to lend a hand. He will be buried on Tuesday, February 19, 2019 at 11:00 AM at a graveside service in the Blakely Cemetery with Rev. Sterling Jones officiating and with full military honors. THE FAMILY WILL RECEIVE FRIENDS FOR VISITATION FROM 10 am UNTIL 10:45 am TUESDAY MORNING AT THE FUNERAL HOME. He was preceded in death by his wife, Neta and his siblings, Doris Stewart, Eugenia Moore, and Margie Dunn. He is survived by his son, Robert (Bob) Luther Thompson III, and his wife Carol of Plano, TX, his grandchildren, Alicia Wanek (Brad) and Matt Thompson (Stacey), and by his great-grandchildren, Kate, Erin, Colin, and Sarah Wanek, and Slaid and Stella Thompson. If you would like to make a contribution in his memory, Meals on Wheels provided a wonderful, caring service to him for over 5 years, allowing him to live independently until his death. Their address is 600 North Tennessee Street, McKinney, Texas 75069.

The family of Robert Luther Thompson Jr. created this Life Tributes page to make it easy to share your memories.

Send flowers to the Thompson family.