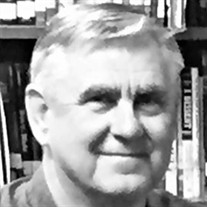 James Allen Weaver, 65, passed away after an extended illness on Monday, December 6, 2021, at his home on Zion Road in Early County, Ga. James was born in Colquitt, Ga. on October 19, 1956, to William Jimmy Weaver and the late Ruth Meredith Weaver. He graduated from Early County High School where he played on the Bobcat baseball and basketball team. A friend and resource to Southwest Georgia farmers, he spent 43 years and 7 months at the local John Deere dealership (29 years as Early Tractor Company and the remaining years as SunSouth, LLC). For the last 30 years of his career, he was Parts Manager. Spending his life in agribusiness, James loved every aspect of life in rural South Georgia. Whether it was checking on and working his cows or cutting and hauling hay or trying to figure out how to get his fishpond to hold water, he was passionate about farm life. As much as anything in his life, James loved spending time with his family. He loved his wife, his daughters and his son in law. He had a particularly special love for his granddaughter Connor and grandson Kris. He always made sure they had everything they needed and most of what they wanted. One of the greatest joys of his life was watching Connor play softball all the way through college and watching Kris play travel ball. While he enjoyed watching them, He was known for being rough on their coaches and umpires. If the doors were open, James Weaver could be found at Zion Freewill Baptist Church in the Sowhatchee community. For most of his adult life, he served as a Sunday School teacher and deacon, eventually becoming chairman of the board of deacons. For many years, he also enjoyed teaching Sunday School to the residents at the Early Memorial Nursing Home. James is survived by his wife of 43 years, Rhonda Jane Glass Weaver of Blakely; two daughters, Jamie Marie Weaver Smith (Shawn) of Greenwood, Fla., and Meredith Amy Weaver of Troy, Ala.; a granddaughter, Connor Nicole Weaver of Pooler, Ga. and a grandson, Kristopher James Smith of Greenwood, Fla.; his father William Weaver (Shirley) of Blakely; David and Hallie Still of Blakely; a brother, David Weaver (Cindy) and a sister, Diane (Mike) Temples all of Blakely; sisters in laws, Ann Lucas, Sue Hughes and Kay Willis (Ronnie); Buddy Lucas and Curtis Hughes; numerous nieces, nephews and great nieces and nephews who were very special to him; and his other favorite “grandson,” William Kaleb Jackson of Greenwood, Fla. The visitation will be Thursday, December 9, from 6:00 p.m. until 8:00 p.m. at Manry Jordan Hodges Funeral Home. The funeral service will be Friday, December 10, at 2:00 p.m. at Zion Freewill Baptist Church in Blakely, Ga. with Alex Howell, Brad Hughes and William Smith officiating. Pallbearers will be Mike Ellis, Jimmy Heath, Chip Houston, Will Jones, Tracy Robinson, Shawn Smith, Dave Weaver and Ronnie Willis with his grandson, Kris Smith and his other “grandson,” Kaleb Jackson assisting. Honorary pall bearers will be the men of Zion Freewill Baptist Church and employees of SunSouth, LLC. In lieu of flowers the family requests that donations be made to Zion Freewill Baptist Church, c/o Kay Willis, 14859 Cedar Springs Road, Blakely, GA 39823. Manry Jordan Hodges Funeral home is in charge of the arrangements.

James Allen Weaver, 65, passed away after an extended illness on Monday, December 6, 2021, at his home on Zion Road in Early County, Ga. James was born in Colquitt, Ga. on October 19, 1956, to William Jimmy Weaver and the late Ruth Meredith... View Obituary & Service Information

The family of James Allen Weaver created this Life Tributes page to make it easy to share your memories.

James Allen Weaver, 65, passed away after an extended illness...

Send flowers to the Weaver family.