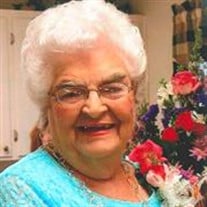 Elizabeth Cleveland Jenkins Rentz, 81, of Blakely, Ga., passed away Saturday morning, October 14, 2017 at her residence. Her funeral will be held Monday morning, October 16, 2017 at 11 AM in the First Freewill Baptist Church, Blakely, GA with Rev. Shawn Williams officiating. The family will receive friends for a visitation on Sunday evening, Oct. 15, 2017 from 6 until 8 PM at Manry-Jordan-Hodges Funeral Home. Active pallbearers were John Watkins, David Jenkins, Michael Jenkins, Tom Wright, Robert Holland and Ronnie Everson. Mrs. Rentz was born on September 8, 1936 in Blakely, GA to the late Ivy H. Cleveland and Ella Sanders Cleveland. She was a member of the First Freewill Baptist Church in Blakely, a homemaker, and had worked part time at Patricia's Beauty Lounge. She was also very active in the Blakely Senior Center. Other than her parents, she was preceded in death by her sister: Ollie Miller and her brothers: Lewis Cleveland, Mallie Cleveland and Ivy Cleveland, Jr. Her survivors include a Son: Charles M. Jenkins and his wife Lisa of Lake Blackshear, GA, 5 Grandchildren: John Watkins of Albany, GA, David Jenkins of Americus, GA, Maranda Wright and Tom of Albany, GA, Michael Jenkins and Angela of Leesburg, GA and Jennifer Holland and Robert of Brooks, GA. There are also 11 Great Grandchildren.

The family of Elizabeth Jenkins Rentz created this Life Tributes page to make it easy to share your memories.

Send flowers to the Rentz family.