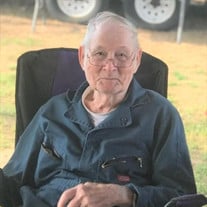 Charles Clark, Jr, 85, passed away at his residence on Monday, November 29, 2021. Visitation will be Thursday, December 2, 2021, at Enterprise Church Cemetery (Clay County) at 10:00 am with a graveside service with military honors at 11:00... View Obituary & Service Information

The family of Charles Clark jr. created this Life Tributes page to make it easy to share your memories.

Charles Clark, Jr, 85, passed away at his residence on Monday,...

Send flowers to the Clark family.