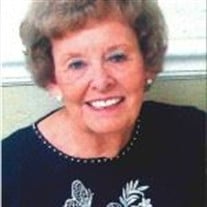 Carolyn Adams Temples, 80, of Blakely, Georgia passed away Saturday evening, July 9, 2016 at her residence. Her funeral service will be held on Tuesday, July 12, 2016, at 2 PM, in the Bethel Baptist Church with visitation at the church from 1:00 pm-2:00 pm. Burial will follow the service in the Bethel Cemetery. Reverend Garrett Davis, her Grandson-in-Law, will be officiating. Mrs. Temples was born on March 6, 1936 in Edison, Georgia to the late Charlie Martin Adams and Ora Lee Todd Adams. She was a member of the former Mt. Ararat Baptist Church. She was known for sharing her deep faith and taught Sunday School classes and Vacation Bible School for several Baptist churches that she had attended during her life. An avid flower gardener, her yard and home were filled with many beautiful varieties of flowers and plants. Her love of nature and the outdoors was captured in many of her paintings as she was an accomplished artist. She was a devoted mother to her daughters and loved being a grandmother and great grandmother. She is survived by her daughters: Pam Coates and Richard of Ft. Gaines, GA, Angie O’Shea and Tim of Marietta, GA and Robin Mitchell and Jeff of Blakely, GA. She is also survived by her sister, Joyce Wilson and Mike of Orange, TX, and two brothers: Hollis Adams and Celestine of Arlington, GA and Quinton Adams and Jean of Elizabethton, TN. She was blessed with five grandchildren: Kerri McDaniel and Jess, Jonathan Coates, Amy Davis and Garrett, Erin O’Shea Harrell and Kevin and Emily O’Shea and fiance Kristopher and five great grandchildren: Zoey, Jace and Jodi McDaniel and Griffin and Alex Davis. Pallbearers are Hollis and Randy Adams, Jonathan and Richard Coates, Tim O’Shea and Jeff Mitchell.

Carolyn Adams Temples, 80, of Blakely, Georgia passed away Saturday evening, July 9, 2016 at her residence. Her funeral service will be held on Tuesday, July 12, 2016, at 2 PM, in the Bethel Baptist Church with visitation at the church from... View Obituary & Service Information

The family of CAROLYN ADAMS TEMPLES created this Life Tributes page to make it easy to share your memories.

Send flowers to the TEMPLES family.