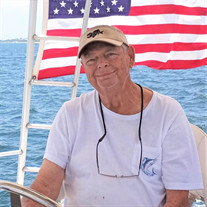 Thomas “Butch” Oakley Moore, age 75, passed away on September 29, 2021 at his home in Blakely, GA, following several months of declining health. Visitation will be held on Friday, October 1, 2021, at the Blakely First United Methodist Church from 10:00 am until 11:00 am. A graveside funeral service led by Alex Howell and Tucker Lewis will be held on October 1, 2021 in the Blakely Cemetery with Lynwood Anglin, Phil Clinkscales, Alva Gibson, Randy Gordon, Dee Grist, C.W. Hodge, Dan Ricketson, and Charles Robertson serving as pallbearers. A life-long resident of Blakely, Butch was born August 8, 1946 to parents Willie Barrentine and Carl Moore. He graduated from Blakely High School, where some of his fondest memories were playing fullback on the 1964 Championship Bobcat football team and earning a football scholarship to Gordon Military College. After an injury ended his football career, Butch married Charlotte Grist, also of Blakely, and was a faithful husband for 51 years. Butch was a third- generation logger and spent his career as an entrepreneur, running his own lumber company. Creative and mechanically minded, Butch loved working on machines and built three sawmills throughout his career. He was also an avid deep- sea fisherman and boating enthusiast. He loved spending time on the ocean in Panama City, FL, where he kept a fishing boat. Butch attended First United Methodist Church in Blakely and was active in the Men’s Bible School Class. He was beloved by all those who knew him: friends, employees, and family. He is preceded in death by his parents. Survivors include his wife Charlotte; two sons and their spouses, Tom (Jenny) Moore of Brookhaven, GA and Richard (Taylor) Moore of Marietta, GA; five grandchildren, Griffin Moore, Isabel Moore, William Moore, Henry Moore, Charlotte Moore; and one sibling, Martha McGahee of Augusta, GA. Manry-Jordan-Hodges Funeral Home will be in charge of the arrangements. The family asks that in lieu of flowers, donations be made to Blakely First United Methodist Church (397 College Street, Blakely, GA 39823) or to your favorite charity.

The family of Thomas "Butch" Oakley Moore created this Life Tributes page to make it easy to share your memories.

Send flowers to the Moore family.