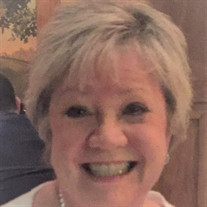 Sheila Pitts Baxley, 73, of 1363 N. Main St., Blakely, Ga. passed away peacefully Saturday, December 7, 2019 at the Navicent Health Medical Center in Macon, Ga. Mrs. Baxley was born July 23, 1946, to the late Lawrence Allen Pitts and Alma Baell Pitts. Other than her parents, she was preceded in death by a sister, Donabel Pitts McMillan and by two brothers, Tarzan O’Brine Pitts and Pershing Allen Pitts. Mrs. Baxley was a 1964 graduate of Blakely High School and attended the University of Georgia where she was a member of Delta Delta Delta sorority and continued to be an active alumna her entire life. “Oh, what a Navy wife,” according to Warren. Sheila was president of the Officers Wives Club and selected as “Woman of the Year” by Training Squadron 5, as well as the USS Lexington, Guantanamo Bay, and Rota, Spain. More importantly, she was Warren’s “Woman of the Year” for 53 years. If something needed to be done, she was always able to accomplish the mission. For example, one time she requested permission from the Secretary of the Navy for her Girl Scout Troop to sell cookies in Cuba, and Warren and his co-pilot flew a plane load of cookies from the United States. She served as president of Pensacola Junior Woman’s Club, Fiesta Cookbook Chair, Lakeview Foundation board member and was an active supporter of Pace Center for Girls, Fiesta Forces and the Mayoki Court of 1995. Upon returning to Blakely, Sheila was an active member of First United Methodist Church, president of the SonShine UMW Circle, a member of Blakely Fine Arts Club and Flower Girls. She was retired as a self-employed Women’s Accessory Representative for many companies. Sheila’s life was devoted to her faithful husband, children, friends and her grandchildren who affectionately called her “Lovey.” She will be remembered as a loving and devoted wife, mother, sister, aunt, grandmother, and friend who lived each day to the fullest in a way that shone light on all who knew her. She spent her days serving others, traveling and visiting family and friends, volunteering at church and, more recently, attending her grandson’s golf tournaments and sharing stories of her grandchildren. Wherever she lived over the course of her life, she volunteered, made lifelong friends and always made others feel loved. She is survived by her devoted husband, Warren Candler Baxley, Jr. of Blakely, Ga., their two daughters, Virginia Holder Baxley Winn and her husband, Harlan Frank Winn, III of Mountain Brook, Ala., Laura Allen Baxley of Birmingham, Ala., a sister, Latane Pitts McNeal and her husband, Lysle, of Blakely; and her four precious grandchildren, “the lights of her life”, Anne Baxley Winn of Denver, Co, Harlan Frank Winn, IV (her birthday twin), Virginia Thomas Winn and Charlotte Allen Winn, all of Mountain Brook, Ala. She is also survived by many other loving family members and friends, including the Magnificent 7. Funeral services will be held today, Wednesday, Dec. 11, 2019, at 1 p.m. at First United Methodist Church with Rev. Tucker Lewis and Dr. Alex Howell officiating. Active pallbearers will be Robert Combs, Harlan Winn, III, Harlan Winn, IV, Candler Baxley, Brandon Bowen and Russell McNeal. Honorary pallbearers are Lisa Combs, Glyndell Thompson George, Libby Hattaway, Linda Merting, James Brewer, Jim George, Michael Evans McNeal and Price Pittman. The family is grateful beyond words for all of the love, support and prayers during this time. In lieu of flowers the family requests contributions be made to the First United Methodist Church, P. O. Box 265, Blakely, GA 39823. Manry-Jordan-Hodges Funeral Home was in charge of arrangements.

The family of Sheila Pitts Baxley created this Life Tributes page to make it easy to share your memories.

Send flowers to the Baxley family.