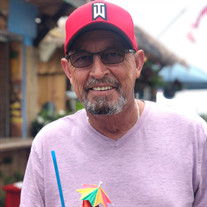 Russell Kimbrel of Arlington, GA passed away in the early morning hours of July 18, 2020 after a courageous battle with pancreatic cancer. Rusty was born in Calhoun County, GA on September 8th, 1962 to Buford Lee Kimbrel and Mary Irisia Beard. Being the 10th child born in a family of 12, he quickly learned the importance of family and it followed him throughout his life. His greatest accomplishments were his three children. His oldest daughter and first born, Brittany Vickers (husband, Kraig) of Leary, GA. was Rusty’s personal secretary who always quieted his controversial political comments and laughed at his ridiculously inappropriate jokes. His only son, MSgt Bryan Kimbrel (wife, Sara) of Hill Air Force Base, UT....who provided Rusty with the proudest tears just a few days ago when he received his latest promotion in a long line of military accomplishments. And lastly, his baby girl Brooke Kimbrel. Rusty’s biggest cheerleader and wild child that kept him young but also a little gray. Like a true southern man, Rusty loved the outdoors. Bass fishing was therapeutic, beach trips were unforgettable and college football made his world go round. As mentioned previously, Rusty loved his family but most especially his 6 grandchildren. Haley & Logan Farris, Evan & Kash Vickers and Leland & Jackson Kimbrel. His favorite title was Papa and it was a job he took seriously, always providing endless love and laughter. Over his final year, he lived life with his girlfriend Paige Hutchins by his side. Her love and kindness radiated throughout Rusty and his happiness was evident in his eyes. Rusty is also survived by four sisters, Melba Jean Hayes, Ora Estelle Cobb, Valaria Story, and Joyce Miller (Raymond); six brothers, William Benson Kimbrel, Buford Lee Kimbrel (Jean), Charles Kimbrel (Sherry), Raymond Kimbrel (Charlene), Casey Kimbrel (Donna) and Andy Kimbrel; and numerous nieces, nephews and friends. In addition to his parents, Rusty was preceded in death by his older sister, Mary Ann Baxley. The family will receive friends and family at the home of his devoted sister, Valaria Kimbrel Story throughout the weekend with services at Manry-Jordan-Hodges Funeral Home on Monday, July 20th. Visitation will be from 4:00-6:00 p.m. with a memorial service following at 6:00 p.m. in the chapel.

Russell Kimbrel of Arlington, GA passed away in the early morning hours of July 18, 2020 after a courageous battle with pancreatic cancer. Rusty was born in Calhoun County, GA on September 8th, 1962 to Buford Lee Kimbrel and Mary Irisia Beard.... View Obituary & Service Information

The family of Rusty Kimbrel created this Life Tributes page to make it easy to share your memories.

Russell Kimbrel of Arlington, GA passed away in the early morning...

Send flowers to the Kimbrel family.