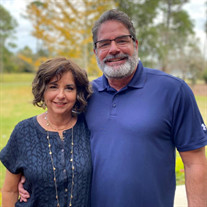 Robert Desmond Toal of Edison, GA went home to be with Jesus on Friday evening, November 27, 2020. He was an exceptional man and will be deeply missed. Rob was born on February 1, 1962 in Dearborn, Michigan to the late Desmond James Toal and Leona Richard Toal. He was one of eight siblings and was brought up with an intense appreciation for family, which he maintained throughout his life. He is survived by his wife of 33 years, Carla Turner Toal; his son Benjamin Toal (Joanna) of Virginia; two daughters, Anna Adams (Tyler) and Sarah Toal; seven siblings, Maureen Gunsolus (Mike), Mike Toal (Mary), Bruce Toal (Catherine), Theresa Bayman (Rohn), Doug Toal (June), D.J. Toal (Alicia) and Scott Toal (Tamsen); and a multitude of nieces, nephews and friends. Rob was an entrepreneur and a farmer, but he would most want to be remembered for his deep, abiding love for Jesus Christ. He was an active member of his church, Shiloh Fellowship in Edison, and through the years, participated in a number of overseas missions trips. He was also on the governing board of There Is More Ministries (Living Waters) in Balsam Grove, North Carolina – a Christian retreat center – and Rehoboth Ranch in Edison – a Christian rehabilitation facility. Rob’s family was dearly loved by him, and he would have rather been with them than anyone else. He was especially proud of each of his children, including Nathan James Toal, who preceded him in death at the much too early age of 15. He adored his adopted hometown of Edison, along with the people who live there. He would often joke that while he may have been born in Michigan, he was a true Southerner at heart. He loved the outdoors and was proud to call himself a farmer. He took great interest in young people and wanted to do what he could to be a positive influence in their lives. He volunteered his time coaching cross country at Randolph Southern, Pataula Charter Academy and Southwest Georgia Academy over a span of many years. He was also a board member at Randolph Southern, a county commissioner in Calhoun County for several years and a long-standing director at the Bank of Edison. Rob Toal’s passing has left a tremendous void in southwest Georgia, and all that knew him will miss him terribly. We were blessed to have had him with us here in this world for the past 58 years. But in the end, Rob got what he most wanted. He is now with the one he loved most – Jesus Christ. We will honor Rob with a memorial service at 10:30 on Thursday, December 03, 2020, at Nubbintown Farms. The address is 2395 Lowe Road, Edison. We plan on celebrating his life and everyone is welcome to attend. The family has asked that donations be made to There Is More Ministries or Rehoboth Ranch, in lieu of flowers.

Robert Desmond Toal of Edison, GA went home to be with Jesus on Friday evening, November 27, 2020. He was an exceptional man and will be deeply missed. Rob was born on February 1, 1962 in Dearborn, Michigan to the late Desmond James Toal and... View Obituary & Service Information

The family of Rob Toal created this Life Tributes page to make it easy to share your memories.

Robert Desmond Toal of Edison, GA went home to be with Jesus...

Send flowers to the Toal family.