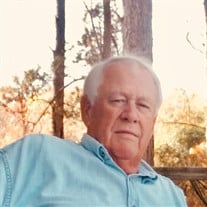 Ray Eugene Joiner, 75, of 3086 Dukes Creek Road, Edison, GA, 39846, passed away Wednesday, November 13, 2019, at Southeast Health Medical Center, Dothan, AL. His funeral will be held Sunday afternoon, November 17, 2019, at 3 p.m. at the Carnegie Baptist Church, Carnegie, GA, with Rev. Shannon Morris officiating. Visitation will be held beginning at 1:30 p.m. Sunday up until funeral time. Burial will follow in the Carnegie Cemetery with Military Honors. Pallbearers will be Roy McDonald, Terry Worthy, Ernie Ford, Chuck Ford, Jake Ford and Harvey Jordan. Ray was born in Americus, GA on June 24, 1944. His parents were the late Robert Eugene Joiner and Katie Louise Manry Joiner. He was a Captain in the US Air Force during the Vietnam War. He flew transport planes in Vietnam. He was also retired as an Agricultural High School Teacher in Randolph-Clay High School system and a retired farmer. He attend ABAC in Tifton, GA and received his B.S. Degree in Animal Science at the University of Georgia. He was a member of the Carnegie Baptist Church. He is survived by his wife, Carol Lee Joiner of Edison, GA, his daughter, Teresa J. Miller and Jeffery of Pineview, GA and his son, Rodney Joiner and Misty of Edison, GA. He also has 4 grandchildren; William Joiner Miller of Pineview, GA, Meredith Reagan Joiner and Maggie Reese Joiner both of Edison, GA and Caleb McCalla and Ruchelle of Hiram, GA. The family would like for contributions to be made to the Carnegie Baptist Church, C/O Harold Andrews, 283 Eleven Bridges Road, Cuthbert, GA 39840.

The family of Ray Eugene Joiner created this Life Tributes page to make it easy to share your memories.

Send flowers to the Joiner family.