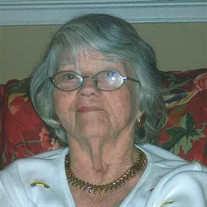 Meda Middleton Williams, 84, of Blakely, GA passed away Sunday night, September 16, 2018 at the Willson Hospice House in Albany, GA after a lengthy bout with Alzheimer's. Her funeral will be held on Tuesday, September 18, 2018, at 11 AM at Southside Baptist church with Rev. Yancey Hartman officiating and Ken Roberts speaking on behalf of the family. Pallbearers will be Charles Middleton, Steve Middleton, Bob Middleton, Alan Darley, Ken Roberts, Gary Mote and Dennis Gilbert. Visitation will be held in the church sanctuary starting at 10 a.m. up until funeral time. Mrs. Williams was born on December 25, 1933 in Colquitt, Ga to the late Howard Middleton and Nina Houston Middleton. She was a charter member of Southside Baptist Mission which later became Southside Baptist Church. She actively served as a Sunday School teacher for preschoolers for many years and sang in the church choir for over 50 years. Mrs. Williams was a homemaker and a part-time florist. Other than her parents, she was preceded in death by her husband of 62 years, W. C. "Buddy" Williams, her brothers, Bruce Middleton, Sidney Middleton and Riley Middleton and a great grandson, Rocky Lamar Stroud, III. She is survived by two daughters, Debra Williams Pellicano and husband, Barry and Lesli Williams Todd and husband Michael both of Albany and one son, Warren Chris Williams and wife Kathy of Blakely, one brother, Wallace Middleton and wife Janet of Knoxville, TN and one sister, Sarah Darley and husband J. D. of Colquitt, GA, 7 grandchildren and 12 great grandchildren. In lieu of flowers, memorials may be made to the Willson Hospice House, 320 Foundation Lane, Albany, GA 31707.

Meda Middleton Williams, 84, of Blakely, GA passed away Sunday night, September 16, 2018 at the Willson Hospice House in Albany, GA after a lengthy bout with Alzheimer's. Her funeral will be held on Tuesday, September 18, 2018, at 11 AM at Southside... View Obituary & Service Information

The family of Meda Middleton Williams created this Life Tributes page to make it easy to share your memories.

Send flowers to the Williams family.