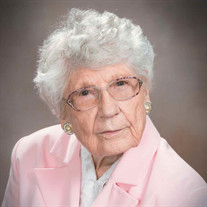 Marion Rabon Shoemaker, 99, passed away April 14, 2019 at Seminole Manor Nursing Home in Donalsonville, Ga. Funeral service will be held on Wednesday, April 17, 2019 at 2 PM at the First United Methodist Church in Blakely. With Rev. Tucker Lewis, Sr. officiating. Burial will follow in the Blakely Cemetery. Serving as Honorary pallbearers will be the Mary Martha Sunday School Class. The family will receive friends at the church on Wednesday from 1PM until funeral time. Mrs. Shoemaker was born in Blakely, Georgia, on November 9, 1919 to the late John Richard Rabon and Margaret Windsor Rabon. Marion graduated as class valedictorian from Hilton High School in 1937 and from Abraham Baldwin Agricultural College in 1939. For many years Marion was a supervisor at Brew-Schneider Manufacturing Co. and was a substitute teacher in the Early County School System after her retirement. Marion was a kind Christian lady who put God first in her life and others needs ahead of her own. She was a devoted member of the Blakely First United Methodist Church where she served on various committees and held positions of leadership in both the church and the United Methodist Women's Organization. She sang in the choir for many years and was a member of the Mary Martha Sunday School Class and the Young at Hearts. She was a talented seamstress and made many beautiful quilts for friends and relatives. She enjoyed cooking and loved having her family and friends for holiday meals. When Marion was in her 80's she decided she wanted a computer so her children gave her one for Christmas. She soon learned to send email and used it as her means of communicating with her grandchildren. She had always loved sending greeting cards so she began designing and printing her own cards and pursued this hobby until she was almost 97 years old. Marion was preceded in death by her parents, her husband of 69 years Lester Harper Shoemaker, her daughter Sharyn Shoemaker Moore; three brothers, John Del, Hiram, and Thurmond Rabon; five sisters, Orabelle Rabon, Maxine DuBose, Dot Goodell, Sara Henry and Jerry Megahee. She is survived by her sons, Larry Shoemaker(Pat) of Donalsonville, John Shoemaker (Annette) of Brinson, and Richard Shoemaker (Kathy) of Winterville, a son-in-law, Billy Moore of Coleman, and a sister June Megahee of Winter Haven Florida; Grandchildren include Brian Shoemaker (Natalie) of Brisbane, Queensland, Australia; Chad Shoemaker (LaKrecia) of Lakeland, Florida; Sherri Shoemaker Moody (Bobby) of Macon; Mikki Moore of Coleman, Sharyn Shoemaker Armentrout (Ethan) of Dacula and Lisa Shoemaker of Smyrna. Great grandchildren are Emma Shoemaker and Matthew Shoemaker of Brisbane, Colin Shoemaker and Kaitlyn Shoemaker of Lakeland, Florida and Mac Armentrout of Dacula. Memorials may be made to Blakely First United Methodist Church, 397 College St. Blakely 39823 or to Seminole Manor Resident Fund, 100 Florence Avenue, Donalsonville, Ga. 39845

The family of Marion Rabon Shoemaker created this Life Tributes page to make it easy to share your memories.

Send flowers to the Shoemaker family.