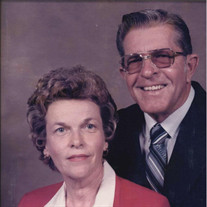 Marcelle Carter Houston, 87, of Blakely, GA passed away on Tuesday morning, December 29, 2020, at LifeBrite Community Hospital. A graveside service will be held at 11:00 a.m. on Thursday, December 31, 2020, in Blakely Cemetery. The family will receive friends from 10:00 to 10:45 at Manry-Jordan-Hodges Funeral Home, prior to the service. Mrs. Houston was born in Colquitt, GA on January 8, 1933 to the late George Guyton Carter and Margaret Mary Sholar Carter. She was the youngest of seven children. Mrs. Marcelle was a retired bookkeeper, homemaker and was of the Pentecostal faith. She married her husband, J. C. Houston, on December 27, 1948 and God gave them 62 years together. Mr. Houston died on March 31, 2010. Her survivors include two sons, Joel Carter Houston and his wife Cindy and Robert David Houston and his wife Candy, both of Blakely; four granddaughters, LeAnna Walls (George) of Leesburg, GA, Laurel Foreman of Leesburg, Kelly Kenny (Mike) of Jacksonville, FL, and Karlee Houston of Tallahassee, FL; four grandsons, Tripp & Tyler Kenny of Jacksonville, FL and Seth & Tate Walls of Leesburg; and a precious child of God, Diane Houston, who was like a daughter to her and whom she loved very much. Other than her parents and husband, she was preceded in death by two brothers, James C. "Bud" Carter and Earl R. "Toby" Carter; and three sisters; Virginia Ingram, Pauline Lofton, and Margaret Crawford. In lieu of flowers or those wishing to make a donation to the memory of Marcelle Houston, please make it to any Christian Charity of your choice.

Marcelle Carter Houston, 87, of Blakely, GA passed away on Tuesday morning, December 29, 2020, at LifeBrite Community Hospital. A graveside service will be held at 11:00 a.m. on Thursday, December 31, 2020, in Blakely Cemetery. The family... View Obituary & Service Information

The family of Marcelle Houston created this Life Tributes page to make it easy to share your memories.

Marcelle Carter Houston, 87, of Blakely, GA passed away on Tuesday...

Send flowers to the Houston family.