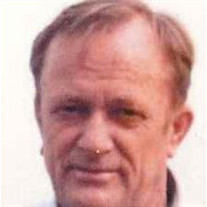 Macklen Lamar (Mack) Griffin, 79, of Blakely, GA, passed away Saturday morning, Nov. 18, 2017 in the Life Brite Community Hospital of Early. Mack's funeral will be held Tuesday, Nov. 21, 2017 at 2 PM in the Chapel of Manry-Jordan-Hodges Funeral Home with Dr. Alex Howell officiating. Burial will follow in the Blakely, Cemetery with Military Rites. Active Pallbearers will be Jesse Murkerson, Will Caudill, Brent Alderman, Ronnie Suggs, Jimmy Murkerson and Mike Newberry. Honorary Pallbearers will be Mickey White, Randall English, Rusty Chapman, Butch Godby and Louette Odom. The family will have a visitation on Monday evening, Nov. 20, 2017, from 6 until 8 pm at the funeral home. The family have asked that no visiting will be held at any of Mack's children's homes as they need the weekend to rest after the long care that they gave their daddy. They will see you friends at the funeral home on Monday evening. Mack was born on March 17, 1938 in Slocomb, AL, to the late G. W. Griffin and Nora Smith Griffin. He was retired as owner/operator of Griffin's Oyster Bar for over 28 years, was a U. S. Army peacetime veteran and was a Deacon at Emanuel Baptist Church in Blakely. Other than his parents, he was preceded in death by 2 brothers: Charles Hollis Griffin and Ted. L. Griffin and a grandson: Wyatt Griffin. His survivors include a daughter: Christina Brooks and Kevin of Blakely, 2 sons: Gary Griffin of Blakely and Macklen Lamar (Macke) Griffin, Jr. and Chelsea of Wicksburg, AL. He has a sister: Linda Griffin Warr and Went of Blakely, GA and 2 Brothers: David Griffin and Gail of Blakely and Edward Griffin and Beverly of Muskegon, Michigan. There are 4 grandchildren: Heather Brooks Still, Kyle Brooks, Justin Brooks, all of Blakely and Judson Griffin of Bainbridge, GA and 2 great grandchildren: Kayden and Eli Still of Blakely, Ga.

The family of Macklen Lamar Griffin created this Life Tributes page to make it easy to share your memories.

Send flowers to the Griffin family.