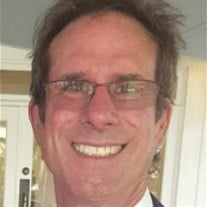 John Hanford Claybrook, Jr., 62, passed away Monday, March 18, 2019 at Southeast Health in Dothan, Al. His funeral will be held Friday afternoon, March 22, 2019 at 1 PM in the Chapel of Manry-Jordan-Hodges Funeral Home with Dr. Alex Howell officiating. Burial will follow in the Blakely Cemetery. The family will receive friends for visitation Thursday evening at the funeral home from 7 PM until 9 PM. The pallbearers will be Jack Watson, Jim Hattaway, Gary Craig, Buck Grist, Brad Waller and Jack Barron. Mr. Claybrook was born March 13, 1957 in Columbus, Ga. to John Hanford Claybrook, Sr. and the late Jane Fuqua Claybrook. John moved to Blakely in 2003 to escape the rat-race of Washington, DC and to keep Fuqua House in the family. He was educated in Culinary Arts in Washington, DC, worked in several fine dining establishments there, such as The Willard Intercontinental Hotel and did catered parties at luxury places such as the Kennedy Center. John opened and ran his own restaurant,(Georgia Brown)in Blakely until 2011, when he closed the business to join the Town and Country Club in Blakely. He is survived by his wife Audra Hendricks Claybrook of Blakely; 2 daughters; Abigail (13) Claybrook of Blakely and Samantha (24) Claybrook of Savannah. Father, John Hanford Claybrook, Sr. of Winchester, Va. and by 2 sisters, Susan Craig (Gary) of Raleigh, NC and Lucia Royal (Henry) of Charlotte, NC

The family of John Hanford Claybrook Jr. created this Life Tributes page to make it easy to share your memories.

Send flowers to the Claybrook family.