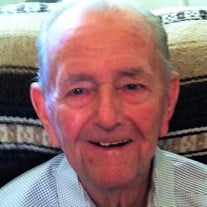 Mr. Joel Phillip Redding, 87, of Bluffton, GA, passed away Saturday morning, Jan. 20, 2018 in the Miller County Hospital. His visitation will be Thursday, January 25, 2018, from 6 -8 p.m. at the Vincent United Methodist Church, Bluffton, Ga and a Memorial Service will be held on Friday, January 26, 2018, at 11 a.m. the Vincent United Methodist Church with Rev. Keith Gaines officiating and Ken Murphree from Farm Bureau sharing memories of Mr. Redding. Mr. Redding was born on August 22, 1933 in Ft. Gaines, GA to the late Buster Brown Redding and Edna Hayes Redding. He was a retired farmer and a member of Vincent United Methodist Church. He had served on the Clay County Board of Education, was on the State Board of Directors, District 8 of the GA Farm Bureau and he was past president of the Clay County Farm Bureau. His survivors include two daughters; Jo Del Perryman and Bill and Debbie Ingram all of Coleman, GA, a sister, Faye Holliday of Alexander City, AL, a brother, John Redding and Levon of Monroe, GA. There are also, three grandchildren: Casey Taylor, Joel Phillip Redding, II and Shara, Jillian Reece Ingram and two great-grandchildren. In lieu of flowers the family requests that contributions be made to either the Vincent United Methodist Church Cemetery Fund or to the General Fund of the Bluffton Baptist Church.

The family of Joel Phillip Redding created this Life Tributes page to make it easy to share your memories.

Send flowers to the Redding family.