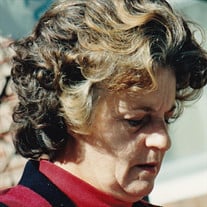 Jennifer Widener Knighton, artist, died December 26, 2017. She was 74. Her service will be a graveside service on Saturday at 11 a.m. December 30, 2017, in the Blakely Cemetery. Her nickname was Jenny. She had bold curiosity, and loved to explore the outdoors. She fed and watched cardinals, chickadees, and wrens, and she liked to turn over stones to see what might be slumbering below. She entered college in the early 1970s, graduating with a Bachelor’s degree from Georgia College, in Milledgeville, Georgia. She was a public school teacher in Early, Gordon, and Hart Counties. Her careers included social work, and owning small businesses. She and her husband, Sonny, had two daughters, and three grandchildren. Paint brushes and garden shovels were her favorite tools. Her paintings were of the ordinary: the green stalks of celery, a single purple zinnia, a head of cauliflower surrounded by its outer leaves. Her artistic talents won her awards in multiple juried art shows. Her work was shown for nearly a decade at Main Street Gallery, in Clayton, Georgia. Jenny’s favorite painters were Georgia O’Keeffe and Vincent van Gogh. Her ornamental gardens included sasanqua, hellebores, daffodils, bearded iris, hostas, and ginger lilies. Her granddaughter, Jennifer, remembers Jenny’s love of a hot, sweet cup of Folgers coffee, and of her grandmother making hand-fitted Halloween costumes. Her daughter, Angel, feels her mother loved without boundaries, showed kindness without expectations, and was happiest when her family was happy. Jenny and her grandson, Isaac, romped through the woods using boot archeology to uncover discarded glass medicine bottles, or uproot cedar stumps. She and her grandson, Lake, often ventured out on their john-boat, exploring coves and collecting driftwood. Sculptures adorn Jenny’s garden, many made with the wood found along the shores of Lake Hartwell. She wore big straw hats, and her hands were often dirt-covered. She played ball with her golden retrievers, Dixie and Blakely. On cool, fall evenings she and Sonny, her husband of 54 years, built fires in their secret garden situated under a canopy of red and white oaks. The two enjoyed riding bicycles, and they often took driving trips along the Blue Ridge Parkway of North Carolina. In the summers, Jenny collected cicada shells and hung them on her denim shirt. She loved seeing the cedar waxwings return in the early spring, and hearing whippoorwills in the evenings. Once, as a child in south Georgia, she heard a panther scream, a sound she told her children that she would never forget, whispering that the big cat “sounded just like a woman screaming.” Her daughter Lisa, a garden designer, often talked with her mother about their shared love of birds and wildlife. The two had a wild fascination with the bones of mammals and snakes, sometimes creating mobiles or even jewelry from the pieces. Thriving on being outside, the two enjoyed digging in each other’s yards, sharing forsythia, woodland phlox, red amaryllis, and spider lilies. Jenny died following complications from surgery. She is greatly loved and will always be missed. The family requests that in lieu of flowers donations be made to your favorite charity in memory of Jennifer.

Jennifer Widener Knighton, artist, died December 26, 2017. She was 74. Her service will be a graveside service on Saturday at 11 a.m. December 30, 2017, in the Blakely Cemetery. Her nickname was Jenny. She had bold curiosity, and loved... View Obituary & Service Information

The family of Jennifer Widener Knighton created this Life Tributes page to make it easy to share your memories.

Send flowers to the Knighton family.