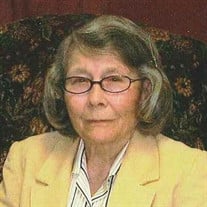 Eloise White Trawick, 95, of Blakely, GA, passed away early Saturday morning, April 27, 2019 in the Early Memorial Nursing Home. Her funeral will be held Tuesday, April 30, 2019 at 2 PM at the First Assembly of God Church with Rev. Jerry Murkerson officiating. The family will have a visitation on Monday evening from 7 until 9 PM at the funeral home. Pallbearers will be Benjamin Trawick, John Trawick, II, Jimmy Trawick, Preston Holt, Jr., W. A. McGhee and Walter White, Jr. Honorary pallbearers will be Shane Focht, Otha Adkison, Homer Welch and Ben Cooper. Mrs. Trawick was born on March 10, 1924 in Blakely, GA to the late Raymond White and Ester Farr White. She was a member of the First Assembly of God Church in Blakely. She retired from the Blakely Peanut Company as a Supervisor in the grading room. After that retirement she got her Certified Nursing Assistant Certificate and worked many years for the Visiting Nurses Association. Other than her parents, she was preceded in death by her husband, Charlie Wayne Trawick. Her survivors include her daughter, Carol Ann Holt and Terry of Cairo, GA; her son: John Wayne Trawick and Ruth of Flovilla, GA; a brother, Walter White of Deland, Fl; 5 grandchildren, John Wayne Trawick, II, Benjamin Trawick, Tyler Preston Holt, Lisa Duke and Amanda Carol Foucht and 11 great grandchildren.

The family of Eloise White Trawick created this Life Tributes page to make it easy to share your memories.

Send flowers to the Trawick family.