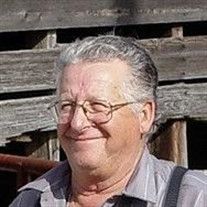 Early Peace (Earl P.) Johnson, 74, of Blakely, GA, died at his residence Wednesday evening, November 8, 2017. His funeral will be held Saturday morning, November 11, 2017 at 11 a.m. in the Chapel of Manry-Jordan-Hodges Funeral Home with Rev. Sterling Jones officiating. Burial will follow in the White Plains Cemetery, Lucile, GA. Active pallbearers will be Haden and Fulton Hester, Dee Haire, Billy Wilson, Brett Johnson and Ronnie Parr. Honorary pallbearers will be Paul Bass, Gene Wilson and Lawson Murkerson. There will be a visitation starting at 10 a.m. Saturday morning at the funeral home. Other than his parents he was preceded in death by a brother, Bill Johnson. Mr. Johnson was born on January 1, 1943 in Blakely, GA to the late William Ellie Johnson and Lucille Womble Johnson. Other than his parents he was preceded in death by a brother, Bill Johnson. He was a self-employed diversified farmer and a member of White Plains Freewill Baptist Church. His survivors include Jean Johnson (Mother of his children); two daughters, Michelle Hester and Tommy of Colquitt, GA, Shannon Corpus and Anthony of Goose Creek, SC; two sons, Kevin Johnson of East Point, GA, Jon Johnson and Glenda of Blakely, GA; one sister, Barbara Ann Hunter of Colquitt, GA; his significant other, Rebecca Ard of Dothan, AL. There are also six grandchildren; Faron Atkinson and Steven of Colquitt, GA, Haley Moseley and Tripp of Blakely, GA; Haden Hester and Fulton Hester of Colquitt, GA, Luke Johnson and Morgan Johnson of Blakely, GA. The family will receive friends at the home of Jean Johnson.

The family of Early Peace Johnson created this Life Tributes page to make it easy to share your memories.

Send flowers to the Johnson family.