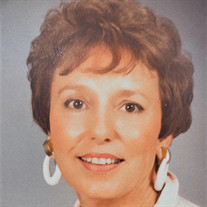 Mrs. Dollie Hammack, 87, passed away at her home in Edison, GA on Thursday, December 16, 2021. Her funeral will be held on Saturday, December 18, 2021 at the Methodist Church in Edison at 2:00 p.m. with Rev. Buddy Cross officiatitng . Visistation will be held one hour prior to the service beginning at 1:00. Burial will follow in the Salem Baptist Church Cemetery. It is with heavy hearts that we announce the passing of our beloved Dollie Blake Hammack. She died 16 December 2021 at her home in Edison, Georgia. She was born March 16, 1934, in Lake City, Florida, the daughter of John H. Blake and Dorothy Nash Blake. As a small child, her family moved to Macon, Georgia where she and her two brothers, John Blake Jr. and Tommy Blake spent their childhood and teenage years. Dollie attended and graduated from Miller Girls Highschool in Bibb County and went on to study at Mercer University in Macon. While at Mercer she was a member of the Alpha Delta Pi sorority and was a little sister at the Kapa Alpha Fraternity. She met her husband, Dan W Hammack Jr. at Mercer, and they were married on March 13, 1955. Following Dan’s service in the U.S. Army at Fort Lee, Virginia, Dan and Dollie moved to Edison, Georgia where they settled and raised their three children, Dan W Hammack III, Susan Hammack and Blake Hammack. Dollie was talented artist and specialized in watercolors creating various landscapes, still life paintings and portraits. During her art career, she held exhibits presenting her beautiful works in southwest Georgia and Macon. Dollie spent her life as a devoted patron of the arts to include classical music and literature and passed this on to her loving family. Dollie was preceded in death by her parents, John and Dorathy; her brothers, John and Tommy and her son in law Marty Albar. She is survived by her husband, Dan Hammack Jr.; her children, Dan Hammack III, (Angela), Susan Cooper, and Blake Albar; her grandchildren, Dan Hammack IV, (Emily), Samantha Hammack, John Michael Hammack, Nash Cooper, Haley Cooper, Adam Albar, and Patrick Albar, and her nieces, Betsy Kessinger, (Jeremey) and April Tourdot, (Marc).

Mrs. Dollie Hammack, 87, passed away at her home in Edison, GA on Thursday, December 16, 2021. Her funeral will be held on Saturday, December 18, 2021 at the Methodist Church in Edison at 2:00 p.m. with Rev. Buddy Cross officiatitng . Visistation... View Obituary & Service Information

The family of Dollie Hammack created this Life Tributes page to make it easy to share your memories.

Send flowers to the Hammack family.