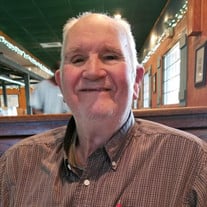 Kirkland, Connie James passed away unexpectedly on January 8, 2022. He was born on December 1, 1936 to Dazzy (DE) and Annie Mae Kirkland in Midland City, Alabama. His funeral service will be on Monday, January 10, 2022 at 2 p.m. in the Salem Baptist Church with Rev. Keith Gaines and Rev. Chuck Stapp officiating, burial will follow in the Salem Cementery. Visitation will be held one hour prior to the funeral beginning at 1:00 p.m. at Salem Baptist Church. He worked several jobs through the years, but was well known as the owner of the Bay Station in Edison, GA and also working as a police officer for the city of Edison. He met and married the love of his life, Elizabeth Kirkland formerly Hammack, in June of 1956 and was married up until her death in November 2015. They had a daughter named Deborah or better known as Debbie. He was an active member of Salem Baptist Church, Carnegie Church, and most recently Edison Baptist Church. In 2019, he became a resident of Seminole Manor Nursing Home in Donalsonville, GA. He adjusted well to that life. He enjoyed telling stories, joking with the nurses and staff of Seminole Manor, and playing games, especially Bingo. While at Seminole Manor, he found a special someone, Mary Conner, to once again fill his days with joy and purpose. Connie was predeceased by his parents, wife, Elizabeth, and sister, Ellie Mae Whatley. He is survived by his child, Jamey and Debbie Kelley, his grandchildren, Kevin and Dena Lee, Scott and Jamie McLeod, Allison and Noah Kelley, Joe and andJalin Swofford, and his great grandchildren Hannah and Nicholas McLeod, Jordyn Swofford, and Dallas, Jenny, and Dakota Baker. He is also survived by two close cousins, Jerry Hartzog and Sam Condrey, as well as many other cousins, nieces, nephews, and friends. .

Kirkland, Connie James passed away unexpectedly on January 8, 2022. He was born on December 1, 1936 to Dazzy (DE) and Annie Mae Kirkland in Midland City, Alabama. His funeral service will be on Monday, January 10, 2022 at 2 p.m. in the Salem... View Obituary & Service Information

The family of Connie James Kirkland created this Life Tributes page to make it easy to share your memories.

Send flowers to the Kirkland family.