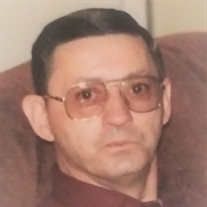 Clair Irwin "Bud" Cole, passed away Saturday afternoon, September 21, 2019, at LifeBrite Community Hospital of Early. His graveside service will be held on Tuesday, September 24, 2019, at 11 a.m. at Houston Cemetery with Mr. Tommy Houston officiating. Visitation will be held on Monday evening, September 23,2019, from 6 to 8 p.m. at Manry Jordan Hodges Funeral Home. Mr. Cole as born in Kankakee, IL, to the late Clyde Irwin Cole and Bernice Jackson Cole. He was a retired Engineer of Car Components at Atwoods in Rockford, IL. He has a Patent # 3,572.793 on a Hood Latch Positive Release Lever Return. He served in the US Navy and was owner of Munchkins Fast Food Restaurant, Blakely, GA. Other than his parents, he was preceded in death by a son, Craig Cole. His survivors his wife, Lera O'Neal Houston Cole, Blakely, GA, a son, David Scott Cole of Leesburg, GA, three grandchildren; Skylar Merkison and Michael of Colquitt,GA, Christopher Cole of Belvidere, IL, and Jenney Martin of Bellville, WI and one sister, Doris Olson of Chicago, IL, and several nieces and nephews and a special niece, Glenda Money

The family of Clair Irwin "Bud"Cole created this Life Tributes page to make it easy to share your memories.

Send flowers to the Cole family.