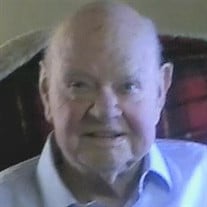 Mr. Billie Claude Spence, 93, of 555 Cooper Loop, Blakely, GA passed away Saturday evening July 29, 2017 at the Miller County Hospital, Colquitt, GA. His funeral will be held Tuesday, August 1, 2017 at 12 noon in the Chapel of Manry-Jordan-Hodges Funeral Home with Rev. Jerry Murkerson officiating. Burial will follow in the Blakely Cemetery. The family will receive friends starting at 11 AM Tuesday morning. Pallbearers will be Billie Spence, Jr., Tommy Gurley, III, Philip Gurley, Ted Williams, Jr., Paul Spence, Stacy Cooper and Bradley Grantham. Mr. Spence was born in Blakely, GA on August 30, 1923 to the late Absalom Claudius Spence and Mattie Mae Jones Spence. He was a Blade and Vein Inspector at the Jet Base for Delta Airlines in Atlanta, GA retiring after 33 years of service. He was in the U. S. Navy during WWII and was a Pilot Trainer, a member of New Hope Baptist Church and he was a lifetime member of the Masonic Lodge # 709 out of Riverdale, Ga. Other than his parents, he was preceded in death by wives; Bernice Tedder Spence and Winifred Parker Spence, a daughter, Bonita Williams, 4 brothers: Elton, Carl, Lane and Norman Spence, and a sister, Marjorie Mueller. Mr. Spence is survived by 2 daughters; Brenda Kemp and husband Stan of Jonesboro, GA, Beverly Gurley and husband Tom of Jonesboro, GA and a son, Billie C. Spence, Jr. and his wife Ginger of Blakely, GA and a former daughter-in-law and long time caregiver, Pattie Spence of Blakely, GA. He has 2 sisters; Wilhelmina S. Griner and June Spence, both of Cartersville, GA and a brother: Dr. Philip H. Spence of Milledgeville, GA. There are 4 grandchildren; Tommy Gurley, III and Sheryl of McDonough, GA, Philip Gurley and Susie of Powder Springs, GA, Amy Inman and Bob of Taylorsville, NC and Ted Williams, Jr. and Kayla of Woodstock, Ga. 8 Great Grandchildren also survive. The family is gathering at the home of Spencer and Gail Mueller at 21931 Lucile Rd., Blakely, GA.

The family of Billie Claude Spence created this Life Tributes page to make it easy to share your memories.

Send flowers to the Spence family.